Our tenants had a lot of fun at our Winter Fun Days! They played a snowball bucket toss where it was the Blue team against the Red team, both trying to throw snowballs in the buckets that were marked with different points. The team that won got hostess pink snowballs, they had so much fun they didn’t want to stop playing.

We also had a winter movie with popcorn and lemonade and later had a winter sundae day, with facts and trivia about Minnesota winters. Our tenants also had the opportunity to go on a medallion hunt. Here are some pictures of our winner, Harry Mullen, who found the medallion in 2 clues, what a treasure hunter!

Every day, Monday-Friday our tenants do morning exercises. They are a really fun group and really enjoy using the maracas.

At our Valentine’s Party our tenants listened to love songs and even songs they could sing to. The music took them down memory lane and they loved hearing those songs and reminiscing. They also loved the sweet heart sundaes which was strawberry ice cream with strawberries and whip cream on top. Not to mention the valentine heart cookies with sayings and sprinkles on them. Some were still singing as they left the party.

Spreading the love from Southview! We hope you have a wonderful valentine’s day well spent with your loved ones. 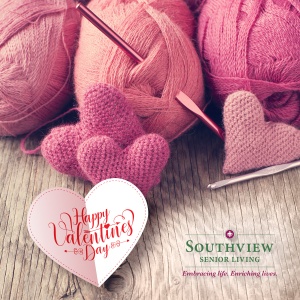 Our tenants in the memory care unit loved creating Valentine’s Day crafts with the help from one of our very own aide’s, Beth Meyer.

Made to Order Breakfast!

Hi: the first 4 pictures are of our volunteer Sunshine group, they are setting up for our Made to Order Breakfast in our community room, what a help these ladies are! The rest are pictures of our tenants enjoying the Made to Order Breakfast including pancakes, eggs, sausages, hash browns, juice, and coffee. Made to order breakfast is always a hit every month. What a great way to socialize and enjoy a home cooked breakfast yum!!!!!!!!!!!

With RSS feeds, you don't have to visit our site everyday to keep up to date. Simply subscribe to our blog via RSS or Email and our posts will come to you!